Since 29-9-20 Saturn finally turned direct again, a massive blessing to many people. The effects of retrograde planets, Mercury in particular, are well known amongst astrology minded people, in as much that they are renowned for piling on the negative impact of the planet's energies and generally acting in a very restrictive mode. Restriction of course is very much a key Saturn word, so that is ...

This is an extremely powerful astrological feature that is around from the 6th April until the 7th May. It can be clearly discerned from looking at the chart’s aspect lines in the centre of the wheel, where you will notice a red square pattern formed by two sets of oppositions that form a cross shape. It is sometimes referred to as a Grand Square. Four (or sometimes more) planets are spaced roughly at 90° to their neighbours and therefore making square aspects to each other. The diagonally opposed planets make opposition aspects, so all told there are two oppositions and four squares (at least) making up a sort of super aspect. This creates a continual flow of energy between the planets, as opposed to individual energies, and it is the combined force of these aspect configurations that make them so strong – they are much more than merely a sum of their parts. Indeed, on the day that the Grand Cross kicks in, the Sun is conjunct Uranus, and with Uranus being one of the main four planets involved, for the onset the Sun makes a very important fifth source of energy, and let's face it, there is nothing more important than the Sun, representing in an astrological chart your very self identity, or in the case of an abstract, non personal chart like the one showing the Grand Cross, the all-embracing elements of the whole package. The planets there for the duration are Uranus opposing Mars (a volatile arrangement by itself!), and Jupiter opposing Pluto. Squares are made between Uranus-Pluto, Uranus-Jupiter, Jupiter-Mars, and Mars-Pluto. Squares bring about tension and unsettling energies between the planets involved, whereas oppositions tend to create more of an out of balance scenario between the energies, rather like a see-saw. As I say, it is the combined effect of it all that makes for such a powerful feature. 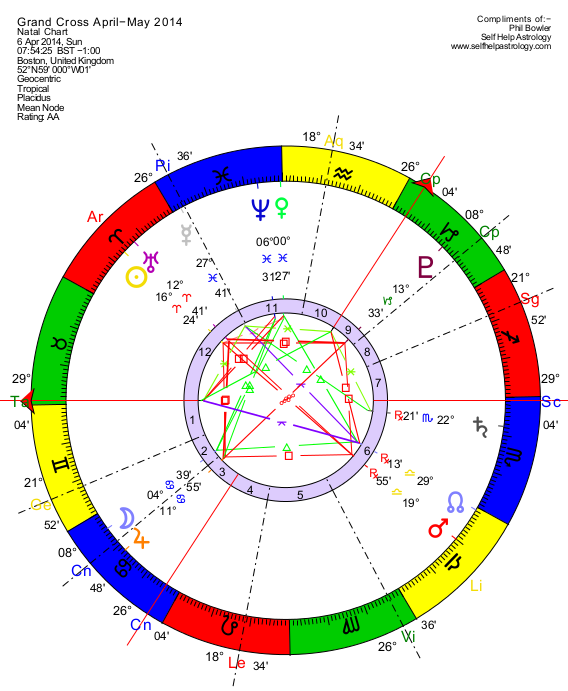 Astrologers who study world political events will be reading a lot into this Grand Cross, but I am looking at it from more of an individual basis. Being a personal astrologer, specialising in the one to one effects of the planets on a person's individual birth chart, this effect will vary greatly from person to person, largely depending on how the involved planets are arranged in your birth chart. Nevertheless, we will all – in some way – feel this huge energy shift over the next few weeks. But it doesn't have to represent doom and gloom, for which a Grand Cross is often associated with. Needless to say the combined effects of these individual negative aspects can be highly limiting and especially restrictive, creating significant challenges, but as is the case with negative aspects in general, they are allegedly here to teach us in life and can be worked around. Obviously a Grand Cross will take a lot more working round than just a square aspect on its own, but it can be done – and once done it seems that the person will go very far. So this last point is especially apt to people born during the Grand Cross, as they will have this pattern throughout their life, as whatever is captured in the birth chart influences our total life path. I know of quite a few people born with a Grand Cross who have successfully worked their way up to have highly successful lifestyles, driven by the combined energies of the Grand Cross. Squares in general drive us on, and make us achieve things, but not without hard work and problems en route. A Grand Cross accentuates all this. The key is to keep positive and not allow the Grand Cross to bring you down – difficult, but the perseverance is often very much rewarded in time. On the other hand, I know of a few people born with a Grand Cross in their chart that have totally succumbed to it. They may as well wear a slogan on their clothes stating “don’t hassle me, I suffer from a Grand Cross” – the effects are that obvious. They have allowed it to take over their lives which have become a series of never ending problems, eating away at them. Others become recluses, not being able to face up to the world. A warning here then how dangerous this super aspect can be if you let it. It is, I’m afraid, very much a make or break predicament and is without doubt the driving force of a person’s chart born at such a time. Make sure then that it works for you, not against you, for whenever any of the planets involved in the formation are triggered by a challenging transit, it then snowballs and all the connected planets suffer.

Briefly, the individual energies are as follows. Mars opposition Uranus is very accident prone, and causes unexpected disruptive out of balance situations, often with other people, which can be highly aggressive and disharmonious. The unorthodox way of Uranus will cause people and events to stray from the norm. Finding the right balance with this unconventionality of course will work wonders.

Jupiter is regarded as the most beneficial of all the planets but when connected to a Grand Cross, its expansive energies exaggerate the combined negativity. Pluto in negative mode can be highly destructive instead of transformational, - it is far too easy under this Jupiter influence to press the self destruct button – therefore the Jupiter-Pluto opposition can wreak havoc if allowed to. Beware power struggles with others, especially those in authority, which will in turn activate the Mars-Uranus opposition, as Uranus hates authority and tradition, etcetera! So the Jupiter squares will exaggerate its expansive principles and activate the disruptive and unorthodox factors of Uranus, and increase the aggression and assertiveness of Mars. Mars square Pluto is an absolute powerhouse by itself, but of course it is far from by itself. Together, this two planet combination is arguably the most potent of all the double acts in astrology. When teamed up harmoniously, via a sextile, trine, or conjunction, the effects are legendary – being able to move mountains so to speak in whatever your personal goals are, and without ruthlessness and manipulation getting in the way. Those are negative Pluto words, which will so easily come to the fore with this aspect configuration. The end results can be just as powerful but with many repercussions en route if you are not careful. Pluto is all about power, and this arrangement can cause the power syndrome to go overboard, out of control – control being another Pluto key word. Both planets turn retrograde during the duration of the Grand Cross, which could accentuate their energies even more, or maybe take them out of the equation, favouring the others. Complex stuff indeed. Pluto square Uranus could greatly upset the unorthodox ways of Uranus, the planet which I regard as the wild card of the Zodiac. Under these negative Pluto energies it can be very wild indeed, causing irrational and illogical situations brought about by a need for freedom and independence combined with power. First you must learn to control the disruptive power in your own life.

The Zodiacal signs picked up by the planets during this reign will not alter: Mars is in Libra, Jupiter is in Cancer, Uranus is in Aries, and Pluto is in Capricorn. The houses in which the planets are passing through though will vary from person to person, and that is where much of the problem areas can be predicted and dealt with accordingly, as the houses represent specific areas of life, e.g. 2nd equates to finances, 7th to relationships, 1st to yourself, and so on.

IF YOU WOULD LIKE A PERSONALISED READING BASED AROUND THE GRAND CROSS INFLUENCE ON YOUR BIRTH CHARTemail me for details.